I'm working on a knowledge management platform for organizations.
Check it out

Notion is not a knowledge base 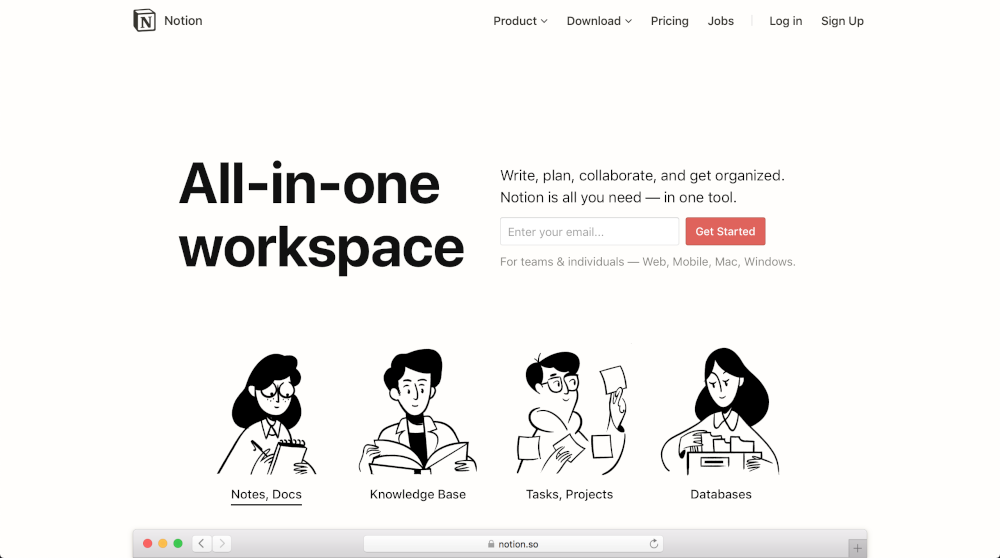 But Notion is special, they have an immense growth. They 4x their user base in 2020, they have more than 4 millions of users, make more than $40M in revenue, are profitable, and everyone talks about them, they refused VC money. They are very successful, but it has not always been the case. The founders explain how much the beginning was. And they had to relocate and fire all their employees to keep the company running. A good reminder for any aspiring entrepreneur, that the success usually comes after years of pain (According to Linkedin Ivan started working on Notion in 2013).

But what company is Notion? You know how much I like to categorize startups. Is Notion, B2B SMB, B2C, B2B Enterprise ? Well I'm not sure of the answer, but I'm sure of what they want to be. They want to be a B2B company, they have recently made Notion free for individual users which is probably a way to send a signal that individuals are not their target users while still using them as a growth driver. They also explained at this occasion that they get most of the revenue from companies. They explain that sub 100 employee companies benefit the max from Notion, while in bigger companies "what tends to happens is that some person or some team tends to have a preference for a specific tool" which is a tricky way of saying that your tool is not best for those companies, but hey you can still use us. They way they talk about the company, they never talk about their individual users, which is weird as they have a TON of them.

Let's dig, and try to find which company they really are. So first, in mid 2020 they had something along 40M in revenue and 4M users. $10 dollars per year per user. Their cheapest plan is $4 PER MONTH and it is for individuals, their public plan for business is $8 per month (which is coherent with the price Confluence or Google Workspace). So from these figures there is no way that most of their users are business. Maybe that the majority of their paying customers are business, but if you count the overall users. They don't have sales guys, they don't hire sales guys, they don't list any big companies in their customer stories. (Well they have some big companies as customers but only for one team among it ). That's very clear they are in fact a B2C/B2B smb companies.

The good and bad of free plans

Should you do a free plan, should you do a free trial, none of them ? That's a common question people ask when they launch their Saas product. What it is clear is that Notion has chosen the free plan option. To make it brief, free plans are usually for B2C and have free users as a marketing asset, free trial is for B2C or B2B SMB when they want all users to become customers but don't want to hire too many sales people. And None of them is for B2B when you want all customers to go through a sales funnel. It is clear that Notion chose the free plan because they want to benefit from the visibility the free uses are offering them. And that happened to be a strong choice. I really think that their business approach has been extraordinary. They have tons of visibility on the web, tons of users loving them, tons of paying customers without almost doing any marketing. They can thank all their users for the communication around the product they do. 2 years ago when I was seeing Notion popup up in companies I was impressed. They have a product which is not really good for companies, that knowledge management admins don't want to see. And despite that there are employees of these companies starting to use Notion for their own team, and then that drives interest from other teams. Which creates a presence in the B2B market, you then just need to transform your companies into a B2B companies, hire a bunch of sales guys, create marketing around that, and you are on the road to make plenty of money. But that's not going to happen.

At that point Notion probably has more than 50% of their users who are individual users. And this is a very difficult position to be in. Imagine you have a company, most of your users don't pay anything and are individuals while your target users are companies. If most of your users are individual your product is probably built around them. Also personal knowledge bases have almost nothing in common with company internal knowledge bases. Yeah of course, both need a way to type documents and create buckets of documents but that stops here. Individuals and companies have strong different needs, trying to create a dual product that includes both features and that is activated depending on the user, is mission impossible. If you tell your individual users that you will stop supporting their use case and they need to find another tool, you will lose what makes your company successful, so that's unlikely to happen. And if you continue to target B2B while not taking into account your individual users, what will happen (and it is already happening) is that users will keep asking for things that you will never build, and at some point they will be frustrated and leave the platform. That's already happening, what individual Notion users want is : offline mode (has almost no point for B2B, and is especially hard to do when your whole product is built on the promise that every content of the interface is live), API (Same), Encryption (Difficult to do when multi users), Beautiful templates (No point for B2B).

They are trapped in here. And that's one of the consequences of the free plan. If free plan users become too big, they will have a strong force to keep the company as it is and prevent it from going where it wants to go. And if those free plan customers are not the same kind of your target customers you are in big trouble, which is what is happening here.

The product is amazing but can't scale past 100 employees

In Notion almost any piece of content displayed in the screen is live. If someone else is modifying the menu it will automatically make the change on your screen. Same for documents. If you change the name of a page it will automatically change the name on the document where this page is referenced. The UI is beautiful, you can feel that everything has been created by designers (The CEO is a designer). The editor works very well. You can't imagine how hard it is to do a rich text editor with tables, images, text, modules and so on, while keeping the selection workings, managing the positioning of elements, you can move elements from a doc to a menu, ... Despite that, the one of Notion works very well and is at the same level as the one of Google docs which is a reference. There are templates for everything, want to create a TODO list ? a roadmap ? a task list ? a customer CRM ? there are templates for all of those things, in a few clicks you will get a page.

But to me the UX is a big issue. You can't just go on Notion and start using it. Look at what looks a table when you create it :

Does that look like a table ? Yeah kinda, but not kinda either. Because in fact a table in Notion is a list of documents, and columns are attributes of the documents. Some documents are text documents, other are gallery views and you have to be very lucky to understand how to create either of them. The interface is super slow, when you search something it starts by returning documents which match your query that are cached on your local computer and then when the requests finished it updates with the real answer. When you want to search by page, you can't see the page tree and pick the page, you have to find the page by name. Just type Notion course on Google and see how many services there are.

Is that an issue ? Not so much, if you want to use Notion as a personal knowledge base. I hope you will take a few minutes to understand the tool and start using it. But if you are a company, do you really think every member of the org is going to go through a course of Notion ? Some will, some won't, and the more you have people who don't the more those people are going to use alternative tools.

The very good thing about Notion is that it can almost do anything. When you are a small company, you don't have to look for a new tool, just build a simple page with Notion for a few minutes and you can start working (This is Excel 2.0. Airtable also wants this place). Want to create job postings ? just create a public page with your job posting. Yes Notion, can also be a CMS for a website. (Surprisingly Notion itself uses Greenhouse for job postings). But if you have worked in a company that starts to grow, the lack of structure and hacker philosophy stops working at one point. When people buy JIRA, they know they could keep going on Excel sheets, but they also know that they will benefit from having a dedicated tool. If you use Notion instead of JIRA, you will need a lot of work to keep the system working.

Notion wants to be good at everything. Other softwares that do everything are called ... ERPs. So yeah Notion is some kind of ERP for small companies used by individual users for note taking.

But I need an internal knowledge base tool for my company, how could I use Notion for that ?

Well you can try, and some manage to do it. If you have a few Notion power users you will probably manage to do it. You will need to teach everyone in your org how to user Notion. You will need to create processes explaining employees how to build documentation, keeping it up to date. And you will then need to hope that people will really respect the processes. Otherwise this is going to become a mess, and someone will have to spend his time fixing pages, changing titles, moving pages ... Notion is not an alternative to Confluence, Sharepoint or any knowledge management tool. They are probably an alternative to Evernote or Google drive. If you want to use Notion as an alternative to Google Drive I think this is a good choice. Even though Notion is slow, it is much easier to create a structure of folders with right management than with Google drive. But as soon as you will be approaching 100 employees you will need to 'unbundle' your Notion workspace into different independant apps. Take a look at Dokkument