I'm working on a knowledge management platform for organizations.
Check it out

During 2019 I was living in Paris and really wondering what I was doing there as my job doesn't require me to be physically in Paris, I was working with teams in India and San Francisco. I don't really need to be close to my friends or be in a place that I know but I need my computer setup to be efficient, and my computer setup is a big issue, as I have three 24 inches monitors an external GPU and an ergonomic keyboard.

But I wanted to travel, how can I keep my efficiency while travelling ? Adapting to a single or two 13 inches monitors was not an option, I have never been able to work efficiency on a small screen. So I had to find a way to travel with monitors. How can I carry abroad 3 screens (55cmx30cm) which weighs more than 3kg each, which required a monitor arm and an external GPU which is 7kg ?

The whole setup is about 20kg, with the weight of the luggage we would already reach the 23kg or even sometimes 20kg of checked luggage in airplaines, the total volume would exceed the maximum volume also and how am I going to protect all that stuff so it doesn't get broke during the transportation ? First try : I can send everything via DHL on a box, That was about 200$, DHL picked the package, went to the custom, and brought it back, they needed invoices, Aaarg I don't want to deal with customs and all that and take the risk to lose everything. So this is not going to be an option

But how then ? I had no idea, I checked on the internet, didn't found anything, some people carried one monitor on the plane, but my setup was much more complex, I had to innovate.

I had to find something so that:

My current monitors were already heavier than the maximum weight, so I had to find other monitors, my first thought was, laptop monitors are so thin, I just need 3 of 24 inches size and everything is solved, yes ... but that doesn't exist, the biggest lcd display pannel that I could find were 17 inches, and you would also need to convert the video signal to hdmi, figure out how to power it, so not possible. Second thought let's go to store and find the slimmest monitors, well ... there is none, you find a lot of monitors with very slim lcd pannel but the power block still takes a lot of space.

I had only one last option, disassemble the monitor and remove anything that is useless.

There a four parts to my journey:

1. How to make the monitors lighter

A monitor is composed of :

So I removed the plastic case, removed the back of the metallic case (probably the heaviest part), glued everything together that everything stay together and kept the power block separately from the monitor, you can see the results below : 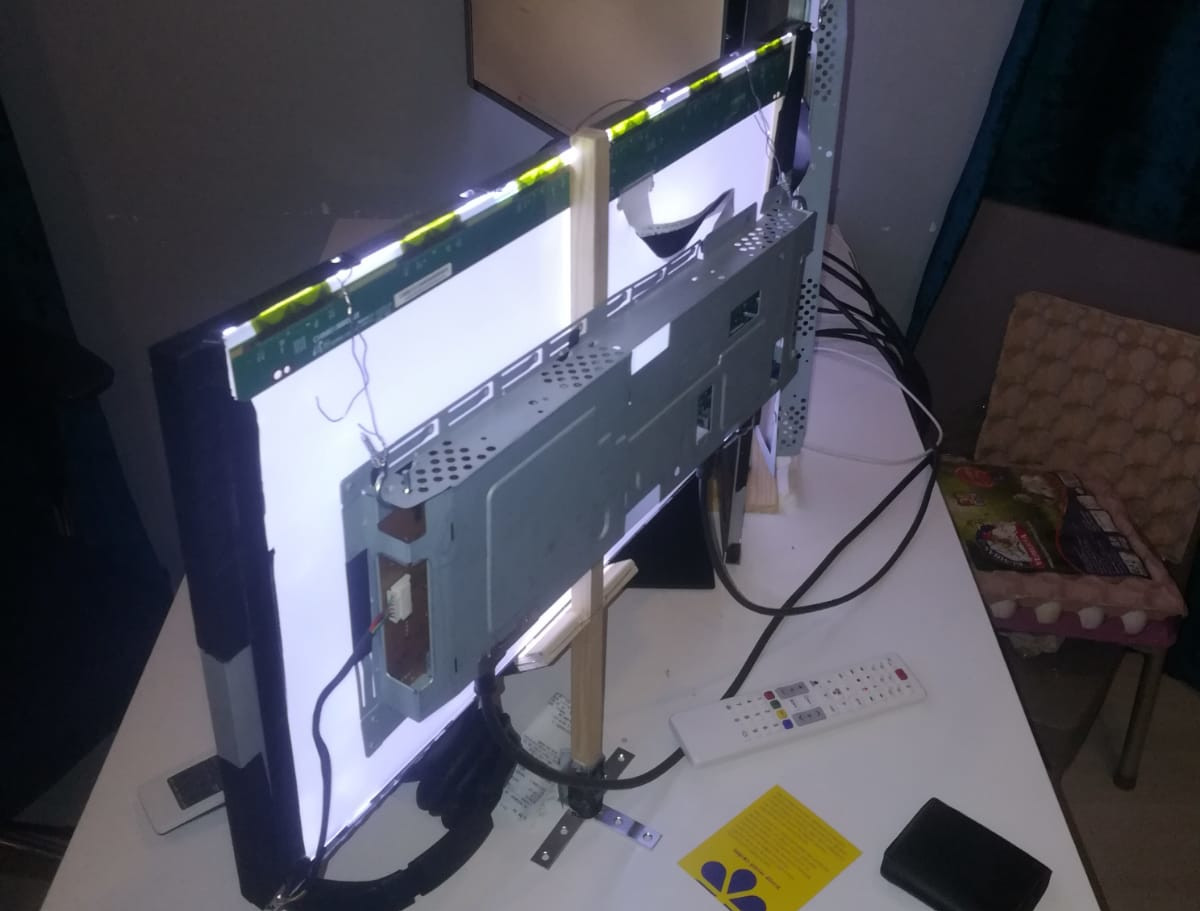 2. How do I keep the Y position of the monitor adjustable

Basically I need three monitors arms, but I didnt find anything transportable, so again I had to create something new that is transportable, light and easy to mount/unmount

When you want to do something solid and light you usually have 3 material that you can use, aluminium, wood and plastic. At that time I was in Estonia and didnt have machinery to build something in aluminium neither plastic, so I had to go with wood.

Here is what I build : 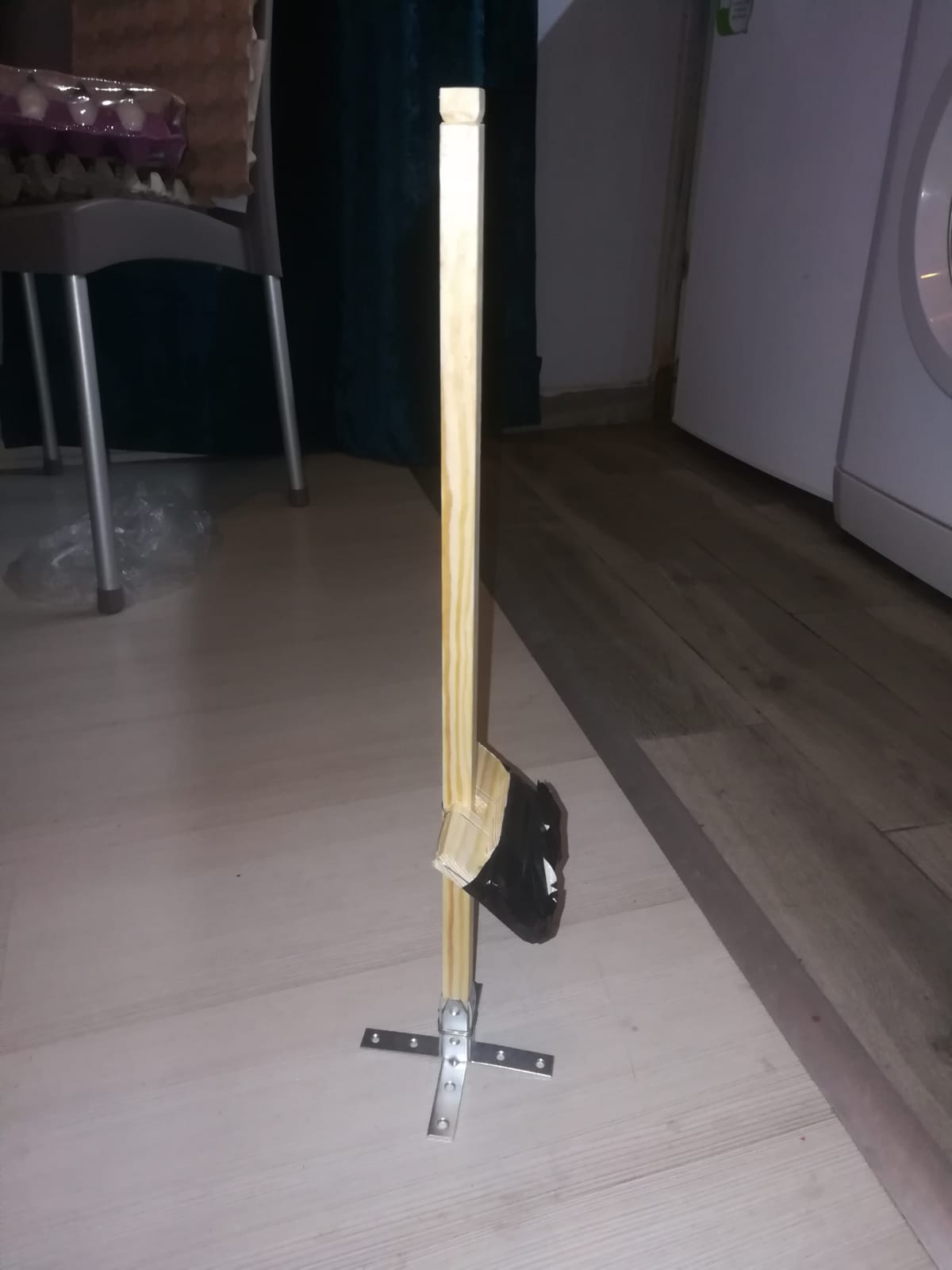 The middle part (in black) is not fixed and can move from the bottom to the top if the shaft,

The bottom is 4 small brackets attached together with some wire

3. How do I plug everything on a lenovo X1 Carbon without an external GPU

The lenovo X1 carbon and most of laptop have an integrated GPU, mine support 3 independents screens, so whatever the adaptator you use and the combination of monitors without using some form of GPU you can't have more than 3 independent monitors.

So for setup I deactivated the internal screen of the Lenovo, and then plugged one monitor on the hdmi output and two others on a dual hdmi to usb c adaptor : This one on Amazon Works great so far !

4. How can I have only one power cable instead of 3

For the powering one thing to take into account is that cable are somewhat heavy and if you have 3 screen + your laptop you will need 4 electrical sockets. You could use the same socket for the screens by doing something like that. 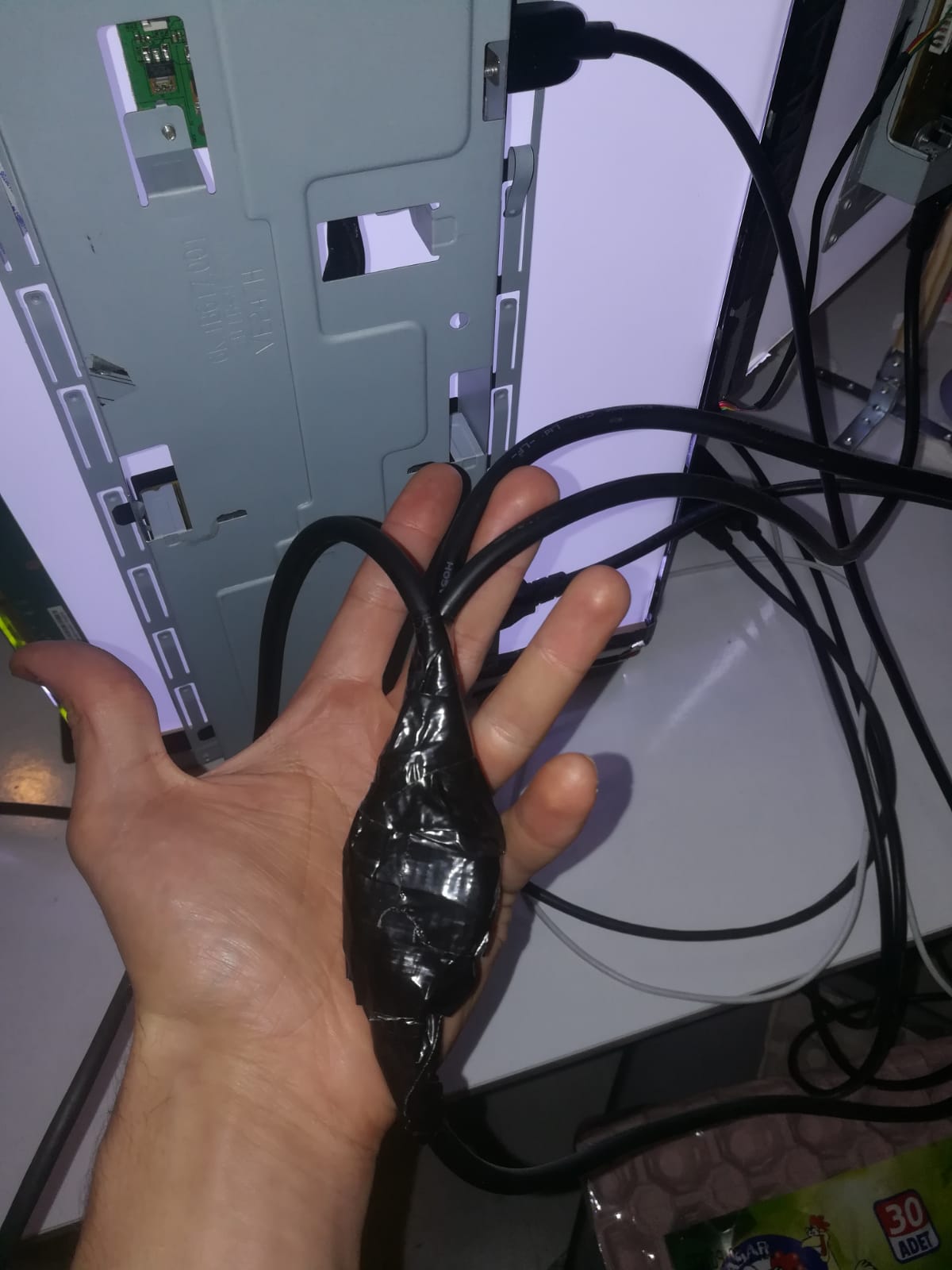 5. How do I transport all that safely

Now it is time to put all that in a suitcase, The simplest thing I found, is you can take one yoga mat and wrap everything inside like that (everything is inside except the cables, the total weight is around 12 kg): 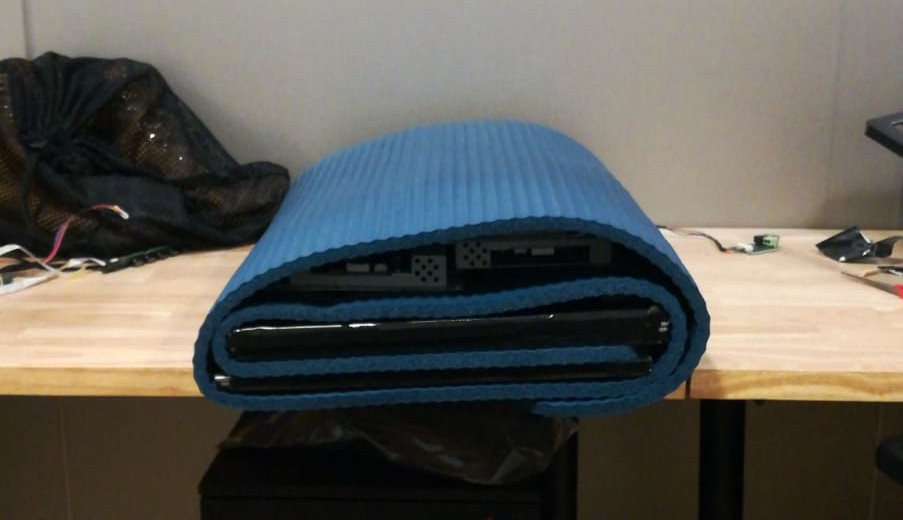 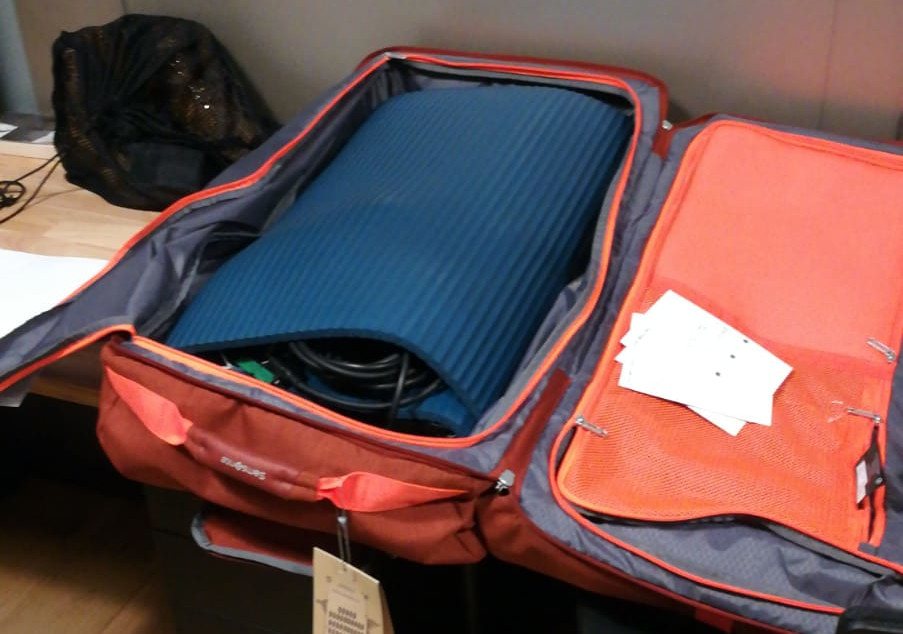 The whole thing take me 8min to fold it and 12min to unfold it. It is about 12kg, it works great so far

Two ways of improvement: find something better designed for the support, and buy some lighter screens 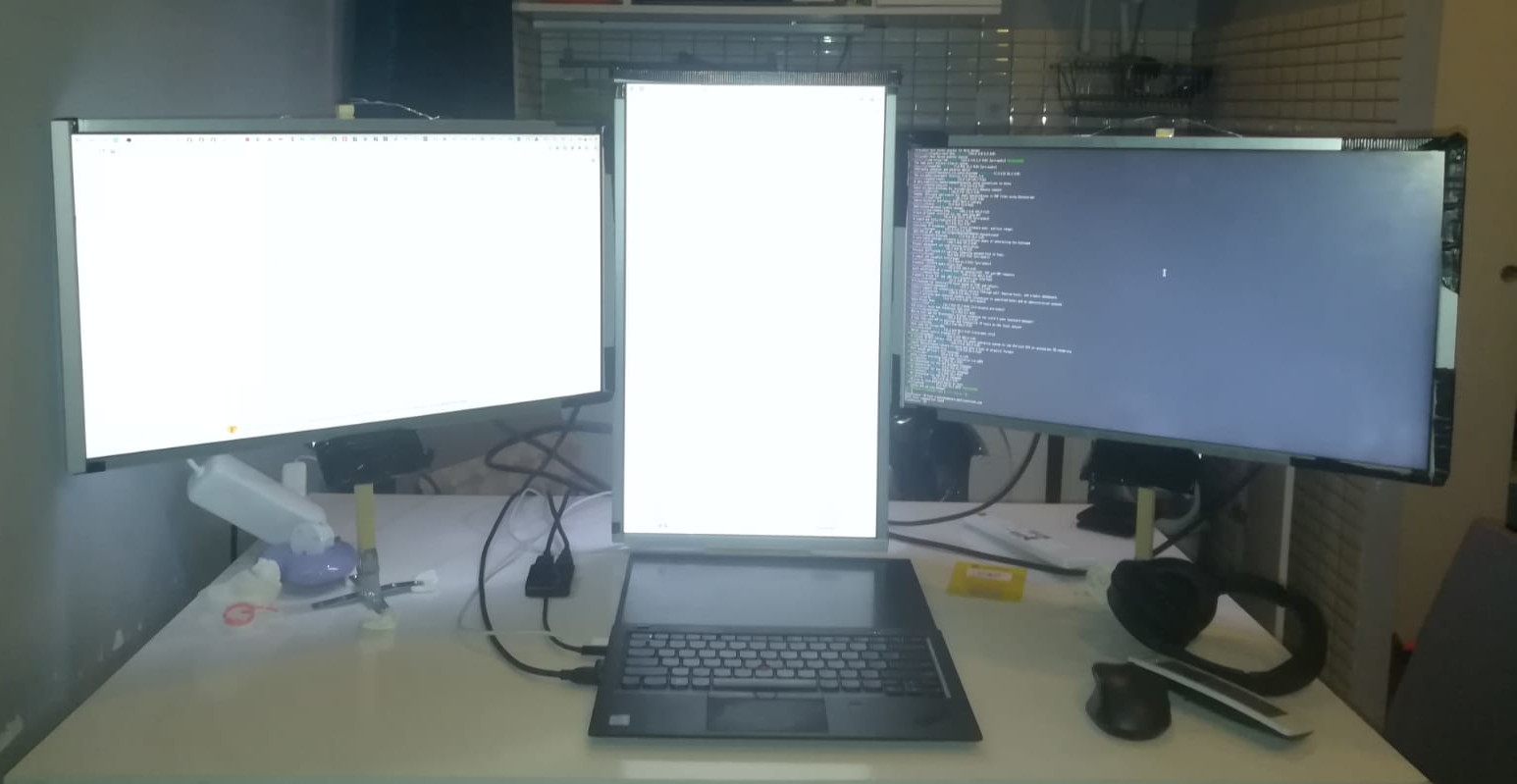